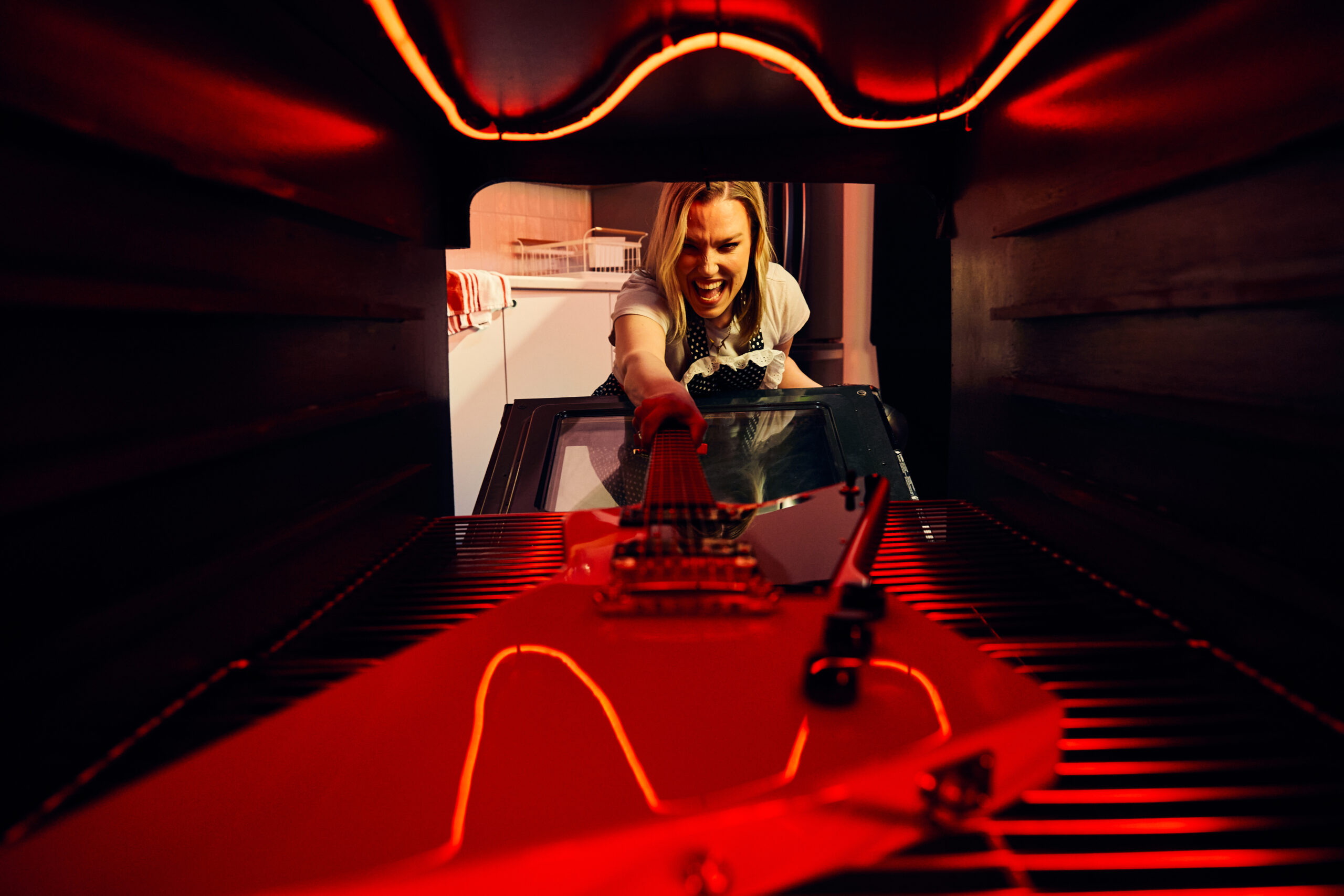 Just this week, Gibson announced a new signature model with Halestorm frontwoman Lzzy Hale. The fourth collaboration between Gibson Brands luthiers and Lzzy Hale, the Explorerbird — a stylish mash-up with an Explorer body, neck, and a Firebird headstock —is the first guitar of its kind and is available worldwide now at authorized dealers and www.Gibson.com.

As the first female Gibson Brands Ambassador, Lzzy Hale joins legendary musicians, in thought leadership, brand research and development, and represents the entire portfolio across all brands including Gibson, Epiphone, Kramer, MESA/Boogie, KRK and Maestro. In addition, Lzzy is involved in mentorship of the next generation of players, as well as exploring and supporting philanthropic endeavors that she is passionate about.

“As synonymous as lipstick and leather, the ExplorerBird brings two iconic worlds together,” says Lzzy Hale. “This guitar is a statement and celebration of owning what makes you stand out. Because no one has ever made history by playing it safe.”

“Lzzy is a force of nature! Our first female global ambassador, she has defied gravity and broken down all barriers and glass ceilings,” says Cesar Gueikian, Brand President, Gibson Brands. “Artistically and musically, she has built a global fan base one tour, one album, one show, and one fan at a time. She has paved the way for Halestorm and for the next generation of guitar players and is one of the most caring human beings I know, who is always exploring ways of giving back and is intimately involved with Gibson Gives and our mission of making music matter more than ever one guitar at a time.”

Gueikian adds, “The new Lzzy Hale Explorerbid, is the result of two years of testing with Lzzy at the Gibson Lab, and on stage with Halestorm. We started with the idea of merging her favorite shape, the Explorer, with the iconic Gibson Firebird, and the result is this new guitar, in cardinal red. It sounds as epic as it looks! Catch Lzzy and Halestorm on tour this summer and listen to their new album, Back From The Dead! Be ready to be blown away!”

Grammy-winning hard rock band Halestorm, released their fifth full-length studio album, Back From The Dead, May 6 HERE. Produced by Nick Raskulinecz (Foo Fighters, Mastodon, Alice in Chains) with co-production by Scott Stevens (Shinedown, Daughtry, New Years Day), the band began writing the album pre-pandemic, and continued throughout lockdown, and the result “is the story of me carving myself out of that abyss,” says Lzzy Hale. “It is a journey of navigating mental health, debauchery, survival, redemption, rediscovery, and still maintaining faith in humanity.”

Fronted by the incomparable Lzzy Hale — whom Revolver named “one of the most charismatic, powerful, and captivating vocalists of our time”–with drummer Arejay Hale, guitarist Joe Hottinger, and bass player Josh Smith, Halestorm has earned a reputation as a powerful live music force, headlining sold-out shows, topping festival bills around the world, and sharing the stage with icons including Heaven & Hell, Alice Cooper, and Joan Jett. One of the most celebrated rock bands of the last two decades, Halestorm’s music has surpassed a billion streams worldwide and earned them two GRAMMY Award nominations and one win for “Best Hard Rock/Metal Performance.”

Halestorm are in the midst of a U.S. headlining tour that includes various openers, including rock icons Stone Temple Pilots, Mammoth WVH, and Black Stone Cherry. In August, they’ll take out The Pretty Reckless, The Warning, and Lilith Czar for a lineup featuring all female support acts. For all Halestorm dates, visit: www.halestormrocks.com.