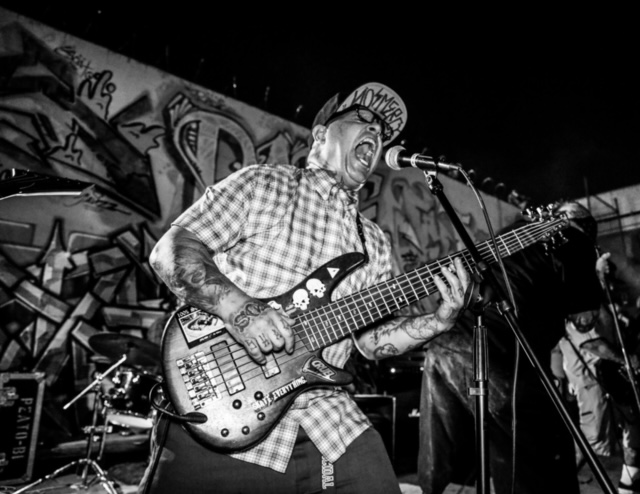 CYCOTIC YOUTH RELEASE NEW SINGLE AND VIDEO FOR ‘CYCO UP!”

Cycotic Youth has released “Cycofied”, their pummeling new track and the first in over 3 decades. Raised in the iconic Venice skate scene that bred legendary groups such as Suicidal Tendencies, 3rd generation Z Boy and singer Jason Brown has resurrected the group with a new lineup ready to retake their crown. Stream the track today on Spotify, Apple Music and most online streaming platforms.

“Cycofied” picks up and levels up where the band left off, with a punk/thrash/metal energy that explodes with fast riffs and powerful angst that reminds listeners of their roots and touches on relatable topics to those from the Venice skate/punk scene and beyond. The band felt the need to raise their voices once again, especially in a world that is full of unnecessary pain, loss and suffering. There is an energy that the band hasn’t felt or seen since the 80’s happening right now, and this is the time for Cycotic Youth to once again spread their message.

“Cycofied is about growing up in Dogtown and Cycofied means just you know going hard whether it’s skateboarding BMX motocross surfing it’s a R word that we used to say back in the days. We are really excited to put out our single because it means a lot to us because it’s about our boy Jay Adams that passed away a few years ago and he was a big driving force behind surfing and skateboarding in our area. Cycotic youth is coming back with the new album and it means so much to me and the band. We do have new members but my brother and I started it back in the 80s, so it’s a completely different band with power, musical content and real anger, so we think y’all will enjoy it” – Jason Brown / Via NoEcho.net

Cycotic Youth formed in 1984 by brothers Jason and Jimmy, and had success with 1985’s self-titled album which led to the band sharing the stage with King Diamond, Death Angel, Cryptic Slaughter and even culminating with selling out their own show at the Roxy in 1987. After nearly 30 years, the band recently reunited for a show with Los Creepers at Café Nela in Los Angeles. Jason Brown is also the owner of Venice based S.T. Tattoo, which he acquired from Mike Muir of Suicidal Tendencies.

In 1984, Hair Metal was dominating the Sunset Strip and Nancy Reagan was telling the youth to, “Just Say No.” But just 12 miles away a new genre of music was uprising and saying, “Fuck You!” to the establishment. That youthful angst mixed with a charged political climate gave birth to one of the most influential Punk Rock bands in Los Angeles; SUICIDAL TENDENCIES, putting Venice/DOGTOWN/Santa Monica on the map. Cultivated from the Chicano street gang style of dress mixed with surfing and skateboarding, an entire sub-genre was born. As the popularity of Suicidal Tendencies grew, other bands started to emerge out of Venice as well; EXCEL, BEOWULF, NEIGHBORHOOD WATCH and a band started by two 15- and 16-year-old brothers; CYCOTIC YOUTH.

The Brown brothers; Jason and Jimmy, along with a few other like-minded misfits launched the 13 track self-titled CYCOTIC YOUTH in 1985; hard core punk mixed with a little ghetto metal. The album was the soundtrack for illegally skating abandoned pools and headlining backyard parties. The brothers played with other bands from the neighborhood as well as big names like King Diamond, Death Angel and Cryptic Slaughter, the self-titled pressing did so well underground that they would eventually sell out the world-famous Roxy in 1987, but as with time went on, life started moving the members in different directions and ultimately apart. CYCOTIC YOUTH disbanded in 1988.

Fast Forward 30 + years, on the invitation of a 30th reunion for Los Creepers, the Brown brothers resurrected Cycotic Youth at Café Nella. The band practiced more and had a good time doing it, eventually playing another show with LA band Countime at the Westside Rebellion magazine launch party. The reception was electric, and the brothers decided it was time to keep the momentum going and show this generation what real hard core is.

With a new line up, the band members Jason Brown (vocals), Nick Garcia (guitar), Rob Mikhail (guitar), Mikey Beato (Bass) and Bill “Stillwill” Greenwood (drums) have taken that youthful angst to a polished, solid and undeniably matured faction. The new material is heavy and fast, blended with lyrics written from pain, loss and angry observations of a changing world, CYCOTIC YOUTH has come back to remind everyone where the fuck they came from and to let the people know, they ain’t going nowhere.